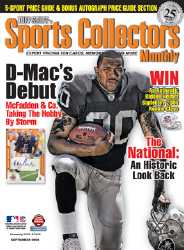 With 20-plus years under its belt, Tuff Stuff’s Sports Collectors Monthly is the hobby’s only all-sport price guide (baseball, football, basketball, hockey, racing and more). Why buy a guide for each sport, when you can receive insightful player profiles, in-depth articles on collecting, and the latest news on what and who’s "hot and not," all in one comprehensive guide?

Founded in April 1984, Tuff Stuff took its name from the "tough stuff" that retailer and original publisher Ernie White offered in his store. Tuff Stuff continued to help readers find the "tough stuff" through several incarnations, first as large newsprint publication and later as a glossy tabloid magazine. In 1990, Tuff Stuff changed to a standard magazine size with a glossy cover — which is how it remains today. In 2008, the magazine’s name was changed to Tuff Stuff’s Sports Collector’s Monthly.

GET SOCIAL WITH US

Type:
Pricing for this placement is only available for registered users. Please login or register.

Pricing for this special is only available for registered users. Please login or register.

In order to add placements or specials to your cart or see pricing, you need to be logged in. Click here to log in, or here to get registered.