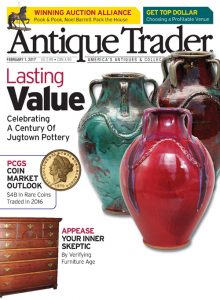 Antique Trader, a magazine published 24 times per year in Stevens Point, Wis., has served the antiques and collectibles community since 1957. Founded by Babka Publishing Co., later to become the flagship of employee-owned Krause Publications’ Antiques division, Antique Trader built its reputation as the premier print vehicle for the buying and selling of antiques nationwide. Its loyal following includes antique dealers, antique show promoters, shop and mall operators, investors, restoration and repurposing designers and collectors, some of whom have subscribed to the paper since its inception.

During its first 27 years of operation, Antique Trader was strictly an advertising newspaper that connected buyers and sellers of antique and collectible items. In 1972, the paper took on a new mantle of importance to the trade when it introduced industry and collecting news to its format. Under the direction of antiques expert Kyle Husfloen, who served as the publication’s editor for 20 years, Antique Trader prospered and rose to a position of undisputed dominance in its field.

The Antique Trader name, which had become synonymous with antiques and collecting in all its forms, served as the springboard for the annually produced Antique Trader Antiques & Collectibles Price Guide. An industry staple, the price guide remains a market leader and America’s No. 1 selling identification guide.

Antique Trader delivers an e-newsletter each Tuesday containing late-breaking news, auction information, and features. Dispatched free of charge, the Antique Trader e-newsletter. Enthusiastically received by collectors and members of the trade, its subscriber numbers have increased substantially since its introduction.

GET SOCIAL WITH US

Type:
Pricing for this placement is only available for registered users. Please login or register.

Pricing for this special is only available for registered users. Please login or register.

In order to add placements or specials to your cart or see pricing, you need to be logged in. Click here to log in, or here to get registered.